The first Eindhoven Upgrade! is due May 5, in TAC, from 20 PM till 22.30 PM. This meeting of minds about art & technology is organised by MAD emergent art center (René Paré / Carmin Karasic).

We are proud to announce Mateusz Herczka and Frederico Bonelli as the first artists/speakers. The discussion is English spoken. 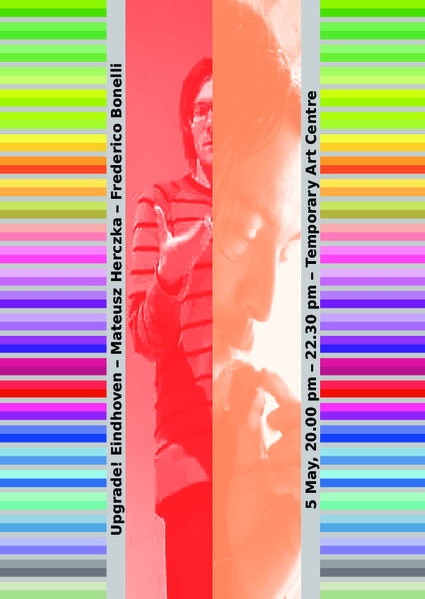 The first Eindhoven Upgrade! is Monday May 5, in TAC (Temporary Art Centre), from 20 PM till 22.30 PM (doors open 19.30). We are proud to announce Mateusz Herczka and Frederico Bonelli as artists/speakers. The discussion is English spoken. This meeting of minds about art & technology is organised by MAD emergent art center (René Paré / Carmin Karasic).

The artists will introduce themselves and their projects related to the discourse between art and technology. To get things clear, we want to discuss the notion of 'art VS science'. Is art hacking technology? or is technology hacking creativity? Where do we stand as artists, curators? And what do technologists, academics say about this?

Mateusz Herczka "has a diverse project history, the common denominator being an interest in bioscience and artificial intelligence research, exploring ways to connect those with realities of human existence and perception. His works appear internationally in artspaces and museums as well as new media contexts. He also collaborates in dance projects with some of Swedens main choreographers, designing and exploring new systems for generating movement."(from his own website).
He participated in the series of workshops, lab-sessions and brainstorms of the first stage of the Ambient Art Experience Warp. This project of MAD has resulted now in the projects TAOS (Gijs van Bon, Mander liefting and others) first presented at STRP festival 2007; and Prototope (Mirjam van Overbeek and Michiel van Overbeek) first presented january 2008 during the opening of Digitale Werkplaats CBK 's Hertogenbosch. He also presented his installation 44\13 at STRP 2006. He studied at the KABK Den Haag with a.o. Horst Rickels. He is an invited artist for Image Radio 2008 in Eindhoven.

Frederico Bonelli "was born in Rome in 1969. Computer hobbyist in the 1980s, in the beginning he was a 'smanettone' (Italian slang for lesser form of hacker). He graduated in philosophy and history of science at the University of Rome. After a period of research within the department of Mathematics working with prof. Lucio Russo as a mentor he decided to practice philosophy as an independent researcher. Bonelli moved to Amsterdam in 2002 to pursue personal evolution and survival as an independent worker. He has developed a large "Protocuadro Installation" with Philips Research Labs that was presented in Eindhoven in November 2007, and is currently working on a documentary project on the Futurists." (from Transmediale website)
He worked together with Philips Research Evert van Loenen in developing Protoquadro in relation to interactive shopwindows. He presented and showed this project during the Image Radio 2007 conference 'Urban screens prelude of virtual reality in public space?' in the Van Abbemuseum. The Enhanced Protoquadro (EPQ) Junglescape was first presented in the Philips Research Experience Lab on November 30, 2007.


A regular gathering of art & technology artists, curators and technologists in Eindhoven
Affiliated with Upgrade! International