Here you can find some basic information about Water Kefir. There are also many PDF documents attached, as well as presentations for Workshops. 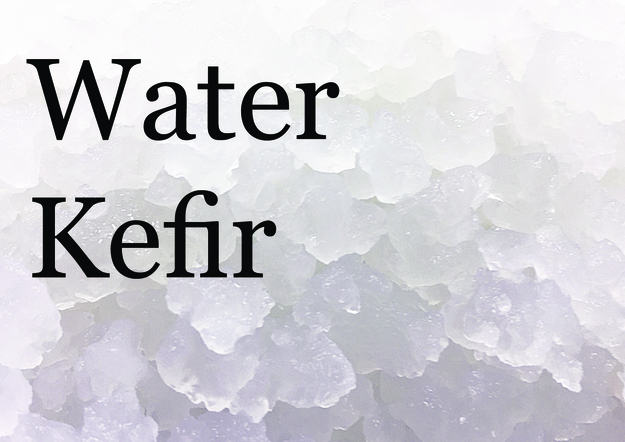 Fermented products are discovered by coincidence. This is also the reason why the origin of WK remains uncertain.

There are two stories about the origin:

(actually there are many more stories about the origin, but it is hard to figure out which one addresses the WK, and which one the ginger beer plant, and many other similar  )

No matter how they were discovered, for sure the most common means to spread the Water Kefir grains is still to pass them from household to household.

Microorganisms are the smallest form of living being and can only be seen under a microscope. There are 5 types of microbes: algae, viruses, protozoa, fungi and bacteria.

How are microorganisms connected to WK?

Yeast belongs to the family of microbes known as fungi (mold also belongs to fungi).
Microorganisms such as molds, yeasts or bacteria create enzymes
to break down energy rich organic substances into simpler compounds.

Yeast and the bacteria are embedded on the surface of the kefir grains.

The grain itself consists of a biofilm made of polysaccharides, which is a biomatter, and microorganisms.

A biofilm usually begins to form when a free-swimming microorganism attaches to a surface.

→ here you can see the types of Bacteria and Yeast which can be a part of your WK culture:

Species Acetobacter
A. fabarum
A. orientalis

Each WK culture can consist of different Bacteria and Yeast, depending on where you got them from, how they’ve been cultivated ect

WK has a lot of probiotics which are good for your digestion and provide your gut with good bacteria.

In general, though, health benefits of WK have not been researched enough yet, and there are no long term studies confirming an impact of WK to your health.

Keep in mind that WK is still a beverage based on sugar water.
Be aware! There will always be some alcohol in your WK. (in homebrewery could be up to 1–4 percent, usually around 0,5–2% (?))

To prepare an aerobic fermentation, you need a bulk jar, a rubber band and a tea towel or cheese cloth and a measuring jug.

You should also have your WK starter, sugar liquid, and figs ready.

The Fig is a convenient way to add fructose and minerals to nourish your water kefir grains. They like to have a various diet, so if you change sugar, or add various dried fruits from now and then, the grains remain happy. This could be dates, raisin, mango, fig or even sometimes without dried fruits during the first fermentation step.

Baking soda: Some people add baking soda "to reduce the acidity in your WK". They say it helps the grains to not to build get too high in acidity. There is no scientific paper mentioning baking soda or even confirming that baking soda has an effect on the grains. I figured out, there is also no peculiar impact on the growth when adding baking soda, but the drink itself turns out a bit more carbonated and also not too acidic.

There are some things to consider in order to be ready to prepare your WK:

Always rinse the WK Grains with fresh water before you make a new batch.
Different Sugars means different tastes. Make sure the sugar is properly dissolved before adding the grains.
Use proper drinking water, chlorine free.  Make sure the water has room temperature. (no boiling necessary, when use of "Mediamatic tap water")
When adding figs, poke the figs, or slice the peel, to allow the WK Solution access to the pulp. (The pulp of dried figs seems to have something to make the grains grow in a convenient way)

Recipe for the first fermentation of WK:

After you put the grains into the sugary solution, add the figs. Then cover the Jar with the cloth and leave it on a warm spot for the next 48 hours. The incubator in the Clean Lab can afford a constant temperature between 23–24° Celsius.

Measure the WK after 48 hours. As a good result I suggest to reach a brix value of 4–4,5 after the first fermentation. You can leave it to ferment for another 8–12 hours, I wouldn't recommend to leave it longer, as it gets quite acidic.

Here you can see the process of the first fermentation:

The 2nd fermentation step is known as an anaerobic fermentation to obtain a bit more fizz in your drink.
First wash all the bottles with hot water. Make sure, the rubber cap of the bottle is not smelly or bacteria infected.
You strain off the grains from the liquid, then fill the liquid into a bottle which you can close tight and flavour it however you like to have it.
Put the closed bottle into the incubator for another 24 hours at 23–24° Celsius.

Be careful when opening the bottles as they build a lot of pressure and sometimes even tend to explode.
If the drink still tastes too sweet for you, you can leave it in the incubator for another 12-24 hours, I reckon to always take out the ingredients first (except very dry spices like pepper or cardamom)
And also don't forget to release the pressure after 24 hours/12 hours...

After the fermentation process, keep your WK Drink chilled to prevent it from fermenting once more.

When adding dried fruits, the drink is more fruity and sweet in the end. --> fruity WK tends to fizz more than spicy WK.
When adding Ginger, either take off the peel, or scrub and wash it very well as ginger has a lot bacteria on the peel which actually could affect your health.
When adding lemon, make sure you scrub the peel properly as there is sometimes a wax coating on the peel. (the more peel, the bitterer your drink gets as the bacteria can absorb the bitter flavours from the peel of the lemon.)

Nice ways to flavour your WK:

There is also the opportunity to make a first fermentation in pre–flavoured liquids. Just follow the steps from the first fermentation but use the flavour infused water instead of normal tap water. If the liquid is already sweetend naturally, you should decrease the added sugar.